ME AND MY OPERATION: Tiny cushion in your knee that helps you avoid drastic surgery

A new cartilage patch means patients with arthritis can avoid a total knee replacement.
John Cronin, 65, an airline sales agent from East Preston, West Sussex, had the operation, as he tells CAROL DAVIS.

Because we live close to beautiful beaches, I’ve always walked a lot with my wife Josie. And until my 30s I played football, too. But in my early 50s, I started suffering pain in my knees, even just getting out of a chair.

I thought it was wear and tear, and my GP agreed.

But it got gradually worse and meant I had to turn down walking holidays. I don’t like painkillers so avoided taking them. Then, three years ago, the pain started disturbing my sleep – I’d wake about once a night.

As I had private health insurance through work, my GP referred me to knee surgeon Dinesh Nathwani at the London Clinic.

He sent me for an MRI (magnetic resonance imaging) scan, and said I had tears to the meniscus – a piece of cushioning cartilage in the knee joint – in both legs, probably from football.
I had keyhole surgery to repair it and Mr Nathwani also drilled into both knees, to stimulate cartilage to grow.

The pain in my left knee went but my right knee still hurt, though less than before.
Scans had shown I also had two patches in the right knee where the cartilage had actually worn away, so bone was grinding on bone, causing pain.

When I saw Mr Nathwani again a month later, he explained these patches were very early arthritis.
I was dismayed as I assumed I’d need a total knee replacement. Some friends who have had this done needed a long recovery.
Then he told me about a trial where, instead of replacing the knee joint, he could repair the damaged patches of cartilage and bone using BioPoly, a tiny oval-shaped patch.

Two of these could replace the worn areas of cartilage in my knee, helping cushion the joint and protect the bone. As I had just a couple of small areas of damage, he thought it would work.

The trial hadn’t started so I had to wait eight months before I could have the treatment. Meanwhile the nagging pain in my knee got worse – I could only climb stairs slowly, and struggled to kick a ball around with my grandsons.

I had the operation in October 2012 and it took an hour under general anaesthetic. The next morning I walked up and down the corridor using crutches.

There was only a little pain where they’d made the incision, and even this lasted for just a couple of days. I left hospital two days later and needed crutches for a week.

Thankfully, there’s no sign of arthritis in my left knee, and I’ve had no problems with my right one since the surgery. I can walk to the beach, play football and cricket with my grandsons, and we’ve been walking in Cumbria and the South Downs, too.

Dinesh Nathwani is consultant orthopaedic surgeon at Imperial College Healthcare NHS Trust and The London Clinic.
Every year more than 70,000 Britons need a knee replacement, because the cushioning cartilage in the knee has worn away and bone grinds on bone, causing pain.

While we don’t fully understand why this happens, it can run in families and is more common in sporty people or those who are overweight, which puts pressure on joints. 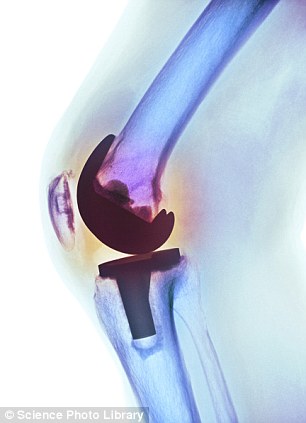 A knee replacement means removing a lot of bone and healthy ligaments (the fibrous tissue which connects bone to bone), with recovery taking up to six weeks.

The replacement is never as good as the original because we are cutting into ligaments (so it can feel loose) and taking away healthy tissue.

In the early stages of osteoarthritis, patients can take painkillers and have physiotherapy to strengthen muscles supporting the joint, which can avoid or delay surgery. Steroid injections or injections of a synthetic form of hyaluronic acid – the knee’s natural lubricant – can reduce inflammation.

Often wear and tear is focused in one place: around 40,000 Britons each year have procedures to repair localised cartilage defects.

One method is microfracture. This involves drilling into the knee to stimulate new cartilage to form – blood contains stem cells which can grow into any cell in the body, so can become cartilage where needed.
But patients spend six weeks on crutches and the procedure can fail within 18 months because it produces a softer cartilage.

Alternatively, we can grow cartilage in a lab from a sample of the patient’s own and implant it in the knee. Though clinical trials shows this works well in certain cases, it’s expensive and isn’t offered widely.

Another option is the BioPoly implant, developed in the U.S. in 2010, where a tiny patch is used to replace damaged cartilage and underlying bone.

This patch has a metal back which adheres to bone, and a smooth front made of polyethylene, a kind of plastic, and hyaluronic acid (making it smooth and slippery like cartilage).

This technology offers a way of treating younger, more active patients (aged 20 to 65).

A knee replacement can wear out in ten to 15 years, when it will need replacing with a second new joint. This procedure can help avoid that. It also means we can intervene earlier and potentially halt the progress of osteoarthritis, saving thousands from years of pain.

This patch is suitable for localised cartilage defects where the surrounding cartilage is healthy.
First I do an arthroscopy – keyhole surgery to identify the localised patches of wear and tear. While we also have scans, taking a good look at the joint means we can check we have treated all the underlying problems.

I then make a 4-5cm incision and locate the damaged area. I put a pin in its centre as a marker, then drill out the damaged area of cartilage and underlying bone, down to a depth of 4mm. There should be healthy cartilage all around it so it grows over the implant.

I press the BioPoly implant into the gap – it has two spikes on the back, which I tap into place using a small hammer. New bone will grow into the implant, anchoring it. Then I stitch up the incision.
We keep patients in overnight, though we could theoretically do this as a day case, and they can put weight on it that night.

We hope the patch will last years, but patients could still go on to have a partial or total knee replacement.

The BioPoly trial, which started in 2011, is being conducted at five centres in Britain, both private and NHS. So far 21 patients have been treated and are doing well.

‘Any new treatment needs to offer significant benefits in terms of knee pain or function, and must not adversely affect the potential success of proven treatments, such as partial or total knee replacement, later in life,’ says Nick London, consultant knee surgeon at the Yorkshire Knee Clinic and Harrogate Hospital. ‘It’s not yet known whether BioPoly could affect the outcome of these.

‘We await the results of clinical trials to see where this treatment fits into the management of younger patients with debilitating knee pain, and to ensure that patients could still have successful knee resurfacing if the device failed or osteoarthritis progressed.’

The operation costs £5,000 to £10,000 privately, and a similar cost to the NHS, only as part of the trial – patients should be referred by their GP.