“I’d like people to know my story because [my knee replacements] have been life-changing.”

When we caught up with Jean to talk about her total knee replacement experience with Dave Duffy, we found her at the gym – which was clearly a good sign. But not so long ago, osteoarthritis was seriously damaging her quality of life.

“My husband and I went for quite a short walk one day and because of the pain I had to sit down five or six times,” she explains. “I’m a person who likes to be active and to exercise and I made my mind up there and then to see my GP and ask for a referral.”

Jean’s GP guided her through a scoring exercise to gauge the severity of the osteoarthritis in her knee. “If we get down to 30 out of 100,” he said, “that’s alarm bells”. Jean’s score was 9, which led to an immediate x-ray and a referral to Dave Duffy. 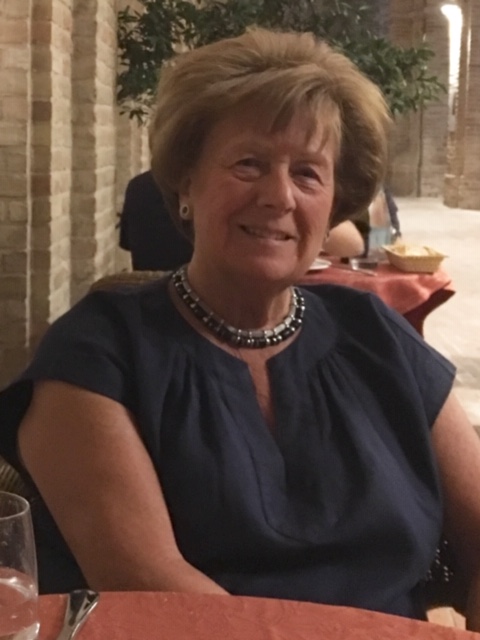 At the first consultation

“I found Mr Duffy extremely easy to talk to,” says Jean. “For such an accomplished surgeon he addressed my issues in a straightforward, down-to-earth manner. He was very clear in his description/explanation of what he would be doing and he showed me illustrations of the type of knee implant that would be inserted. He was very reassuring and his assistant was also kind, sensitive and positive – they make a brilliant team. They were so thorough, and allowed me time to reflect and ask questions.

“From the x-rays Mr Duffy was able to show me that the right knee was in worse shape than the left, but it was the left knee that was causing me the most pain so he agreed to do the left knee first.”

Dave encouraged Jean to remain as fit and healthy as possible before the operation as it would ensure she was better able “to cope with the rigours of physiotherapy afterwards”.
“I had every faith in him and, aside from the obvious anxiety of having your knee knocked about, I felt no qualms and immediately felt I was in good hands.”

“The operation, the reassurance of the anaesthetist, and the support in the recovery room were fantastic,” Jean recalls. “I don’t feel I tolerated the painkillers so I felt nauseous for a while afterwards but I did get up and do the physio as instructed and I felt I made good progress.

“The lack of appetite and supressed taste buds lasted perhaps 2-3 weeks before I felt as though as I was really on the mend. That’s nothing to do with my knee surgeon – it’s just my reaction to the painkillers, which I needed to take be able to cope with the exercises as instructed by the physios. I knew it was a means to an end.”

Jean’s progress was swift: “I seemed to spend hardly any time walking with a frame and was quickly onto sticks for maybe a week and then on one stick for another week. By week four I was off sticks entirely and told I could drive my automatic car again.”

Jean’s left knee was “feeling great”. She had been back, walking in the swimming pool at her gym after four weeks (with approval from her knee consultant and physios), and doing gentle aqua aerobics by week six. So by the time the second total knee replacement happened, some 19 weeks after the first, Jean knew precisely what to expect.

“David did an equally brilliant job on the second operation. He had given me so much praise and encouragement following the first op – and I felt so completely confident in him – that this time round the recovery was even quicker because I knew what I was doing and I knew I wasn’t going to ‘break’ my knee by moving it.”

Jean was walking with sticks after six hours and tackling stairs the day after her operation. On her return home, she was walking up her road (accompanied by her husband) the same day and was driving after 3.5 weeks.

Jean’s second operation was in February 2017. And now?

“Things are absolutely amazing,” she says. “At 72 I’ve really had a lifechanging experience. I do as much exercise as I can – much of it in the water as there’s less impact. I used to go into town to do shopping and I had to move the car and park in several places because I couldn’t walk from one end of Harrogate town centre to the other. Now I can.”

Jean’s new knees have also helped her enjoy her summer holidays again. “We often go to Italy, staying in little hilltop towns. Before the operations coming down the hills had been excruciating. This summer and last summer [post-op] I could tackle the hills without any pain.”

For all the support Jean has received, she is eager to stress the role of the patient in ensuring a speedy recovery. “I can’t recommend more highly the importance of keeping yourself fit and strengthening the muscles in the leg. I would advise anyone facing knee surgery to enrol at a gym with a pool. Exercising alone is obviously a very solitary affair. Exercising as part of a class or with instructors at the gym, is so much more encouraging and empowering and I am most grateful to the staff at Nuffield Gym, Harrogate for their support.”

But Jean’s greatest praise is reserved for Dave Duffy and his team.

“I want anyone who reads this to know how fantastic everyone has been. I have nothing but admiration for the skill and professionalism of Mr Duffy and his team. I could not praise him, his team and the physiotherapists highly enough.”