“There’s nothing that makes me think I’ve got a knee replacement in there – it just feels normal.” 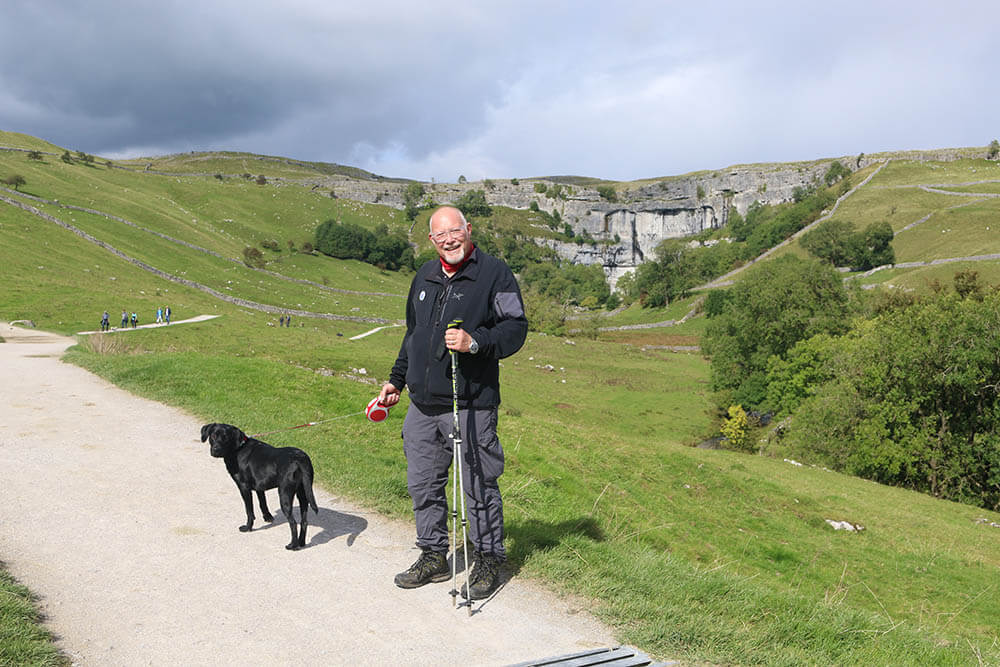 20 years ago, Tim Barber had a car crash. Over the intervening years, he had overcompensated for the damage to his right knee by placing extra stress on his left. “Gradually, over a period of time, I’d worn away all the cartilage in my left knee and ended up with bone grinding on bone,” he explains.

An arthroscopy in 2017 had washed the knee out and alleviated pain temporarily but within six months things were deteriorating rapidly again. “I could still walk,” says Tim, “but it was becoming more painful all the time and I’d developed a bit of a limp. I’d started to really begrudge walking the dog because I knew 25 minutes of it was going to be really painful.”

Tim was advised to delay any knee replacement for as long as possible to avoid issues with ‘replacement replacements’ in later life, but countering that was his need for a pain-free knee now. “I walk a lot as part of my work as a tour guide for Yorkshire. I love walking for leisure and I’m only in my fifties. I figured if ever there was a time when I needed my knee to be right, it was now.”

Tim visited Yorkshire Knee Clinic’s Dave Duffy. “I had an x-ray,” he recalls, “but I didn’t need an MRI as it was quite clear to Dave that I didn’t have any cartilage. ‘It’s bone on bone’ he said, ‘and you’re developing bone spurs – so you need a half knee replacement’.”

Within 2-3 weeks, in April 2018, Tim was heading to Harrogate’s Duchy Hospital for private knee surgery. “Check-in at the hospital was all very easy and I was first in theatre that day,” he states. “I was advised to have an epidural because you recover quicker and you don’t have the grogginess of a general anaesthetic.

“Putting the epidural in took about five minutes. I found that rather uncomfortable, but once it was in I quickly lost the sensation in my legs. They put a screen up in front of me so I couldn’t see anything, and I put my headphones on and relaxed to a chillout playlist while Dave went about his work. Despite it being an epidural you still feel quite sedated throughout. Once it was done I was wheeled back to my room.”

It didn’t take long for the effect of sedation to wear off. “I could talk normally after an hour,” Tim remembers, “and that afternoon I was up and out of bed and able to use a frame to get to the toilet.”

Tim had been told to prepare for a two-night stay in hospital although “they did mention I might be out sooner depending on how quickly I could mobilise afterwards.”

So after one night’s rest, Tim made the most of his second day. “Early the next morning a physio came to see me, got me up on two sticks and had me walking up and down the corridor. I didn’t find that too difficult and the physio said that if could manage stairs I may be able to go home that day.”

As soon as the physio had gone, Tim set about ensuring his discharge. “I remembered from a previous knee op how to do stairs with sticks, so I nipped back down the corridor, practised a few times and then was fine for when the physio came back. All told, I was in for just over a day.

“Once home I was initially using two sticks when going up stairs, just for confidence. I was down to one within a day and walking without sticks within a couple of days.

“You get sent home with some painkillers and anti-inflammatories. I was warned the painkiller would cause constipation (and it did) so I stopped that within 48 hours and just used the anti-inflammatories. The knee ached a bit but it wasn’t anything like the sharp pain I’d had previously. If you put my prior pain at 100%, within two days of the op it was at 10% or 20%. After that, the pain really wasn’t an issue at all. I’ve had much more painful ops with much longer recovery times.”

Six weeks after his operation, Tim returned to see Dave for his check-up. “I was able to walk in unaided without any form of limp, and Dave was delighted with my progress,” he says. “By then I was back working and walking as normal.

“Now, the knee’s absolutely fantastic. I was up at Ingleborough at Christmas so the fact I’m climbing mountains – I’m clearly doing alright. And I can speed walk the dog now!”

On reflection, how does Tim feel about his partial knee replacement and his experience with Dave? “The care at the Duchy was stunning, and Dave’s care and attention to detail – it was probably beyond the call of duty. You meet some doctors that may be technically excellent but they can’t communicate. Dave’s manner is such that you really understand what’s going on. He shows you models of joints. He’s honest about the pros and cons and what to expect in recovery and that knowledge really helps when you go through your recuperation.

“There’s nothing that makes me think I’ve got a knee replacement in there – it just feels normal.”

To speak to Dave Duffy, or our team about your knee consultation, please contact us.