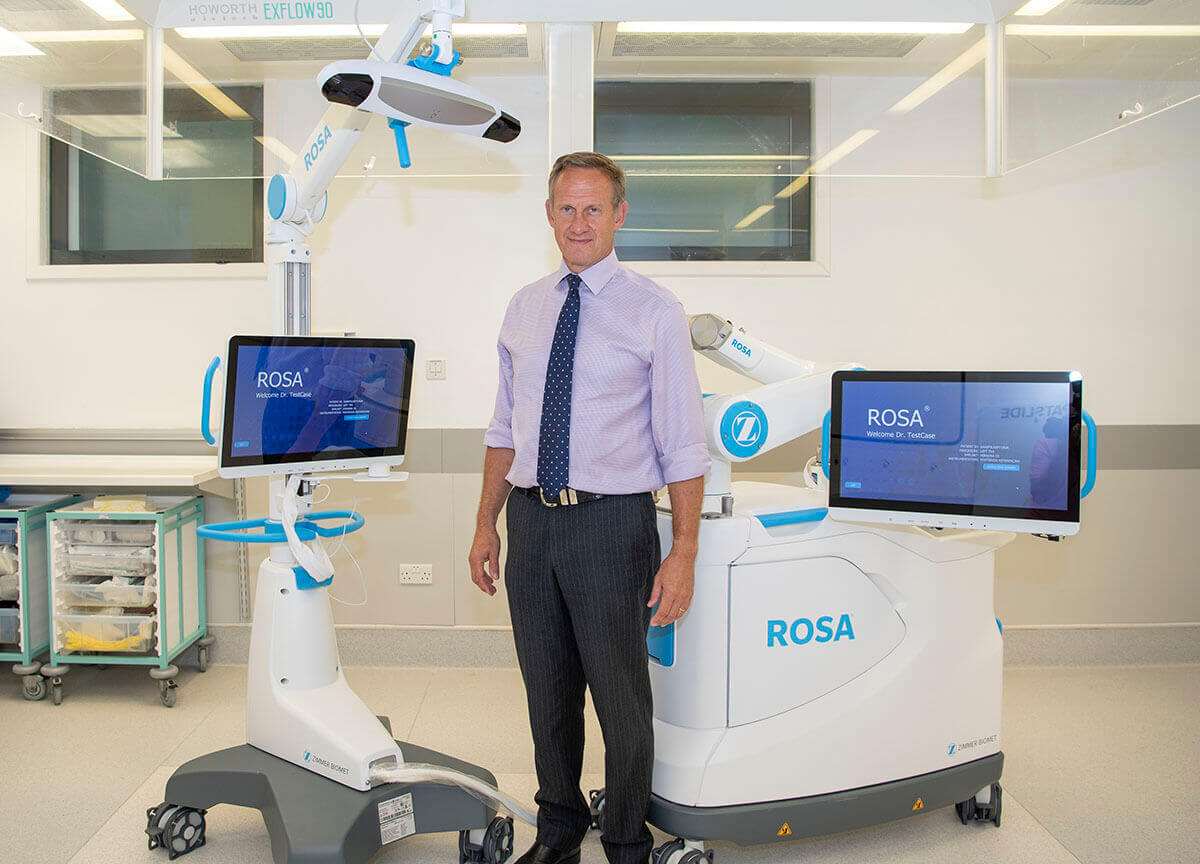 If you’ve been researching knee surgery for some time, you’ll know that various forms of robot assisted knee surgery have been available for years. So why has it taken until now for us to offer it? Nick London explains.

Not long ago, YKC’s knee surgeons were asked if a ROSA robotically assisted surgical system would help with our knee replacements. This led to a debate among us because, if you’re at all familiar with these pages, you’ll know that our position regarding robot assistance systems has been pretty consistent. We’ve seen the potential, but have always felt that issues surrounding the technology, the cost-benefit and the risk hadn’t been sufficiently addressed to recommend them in preference to conventional surgery.

Our position has always been that there’s little point in pursuing a new technique unless you can prove that technique delivers better results and/or lower risk more cost effectively than conventional surgery. In all honesty, we still don’t believe such things have been entirely quantified yet, but because more robot assisted procedures have been completed in the past few years we now have more data to review. That data doesn’t indicate any consistent or significant concern about risk.

We’ve seen subtle shifts in other ways too:

Costs have reduced: As with any new technology, costs fall as the tech becomes more commonplace. Not every robot assisted system costs the same, but the ROSA is substantially less cost intensive than some competitor systems meaning there’s less cost to pass to the patient.

Implant match: All four Yorkshire Knee Clinic surgeons have used implants by Zimmer Biomet for years. As a consultant, I’ve used them for twenty-one years. The ROSA system, also by Zimmer Biomet, enables us to continue using those implants. That’s important, because we know they are high performing implants produced by a company with a long track record of successful hip and knee replacement implants. It also means we’re only changing one element of our procedure (the robot), not two (the robot and the implant) – and that reduces risk.

Improved alignment: You may well have read some rather wild claims about robot assistance technology. Claims that it can reduce the length of your hospital stay or lead to a faster recovery are, frankly, difficult to understand and lack some credibility. What’s more, they cloud what is, I believe, the most important benefit of robot assistance and the main factor in our choosing to adopt the ROSA system: the potential benefits for positioning and alignment.

With the conventional instruments we’ve been using for decades, the rotation, sizing and alignment of implants (that is, effectively, how straight we get the leg compared to the alignment we’re aiming for) is extremely accurate in the majority of patients. In somewhere between 90% – 95% of patients we will hit the ‘sweet spot’ of alignment. In another small percentage of patients the alignment may be slightly less than perfect, but sufficiently good that you would probably never notice any issue, and which has no clinical significance. And then there’s a small pool of patients – perhaps 2% – 5% where the alignment may not be as good as we would like it to be.

Alignment has a direct impact on the survival of the knee implant. Like a new clutch in your car, it works best when it is installed correctly. If it is misaligned – even slightly – the stress forces with which it has to cope will cause it wear out quicker than it otherwise would.

Some patients are at greater risk of misalignment. Patients with a high BMI, patients with significant pre-existing joint deformities including severe deformities as a result of their osteoarthritis, healed fractures above or below the knee and factors affecting the joints above or below the knee (the hip or the ankle) can all increase the chances of an alignment that is less than optimal. 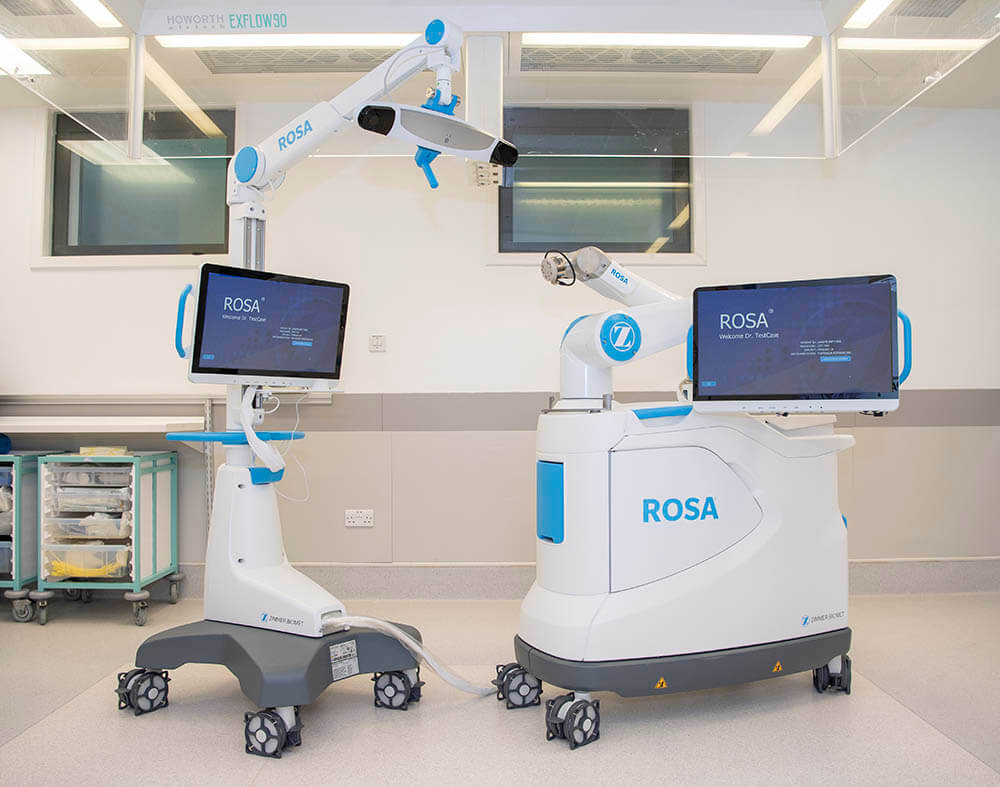 What does the robot do?

It’s important to stress that robot doesn’t remove the need for an experienced knee surgeon. The robot does not ‘do’ the knee replacement surgery. The ROSA does not cut. It does not implant. It does not stitch. It is a tool for alignment and an extra ‘plumb line’ for the surgeon, a constant check throughout surgery that the alignment and rotational positioning of the implant are correct.

Can you ask for robot assisted surgery?

Yes. Although another question might be more appropriate: would robot assisted surgery benefit you?

Ultimately, that is the key issue. A robot is a tool like any other. It is for the surgeon to weigh up the options and recommend it to a patient if they feel that, given their particular circumstances, robot assistance may help to deliver optimal surgery. The patient doesn’t have to accept that recommendation, of course – if they wish to pay for robot assistance despite a recommendation for conventional surgery, they can.

How much does robot assisted surgery cost?

What are the risks of robot assisted surgery?

Robot assistance systems are a new technology which bring potential benefits but also potential risks. It’s important that, in determining whether to recommend robot assistance, we fully understand and consider those risks.

Increased time in surgery: Robot assisted knee replacement doesn’t take much longer than conventional surgery – but the additional 10-20 minutes means more anaesthetic has to be delivered which does bring a slight increase in risk.

Increased risk of infection: In order to do its job, we place pins in the leg so the robot understands where the bones are. That brings a slight increase in the risk of complications, particularly infection.

Robot error: An extremely small risk, and one that can be mitigated by choosing an experienced knee surgeon with the skill and experience to know if a robot is trying to guide them in the wrong direction.

Overall, the evidence suggests there is no significant increase in the risk presented by robot assisted surgery, although the potential remains. 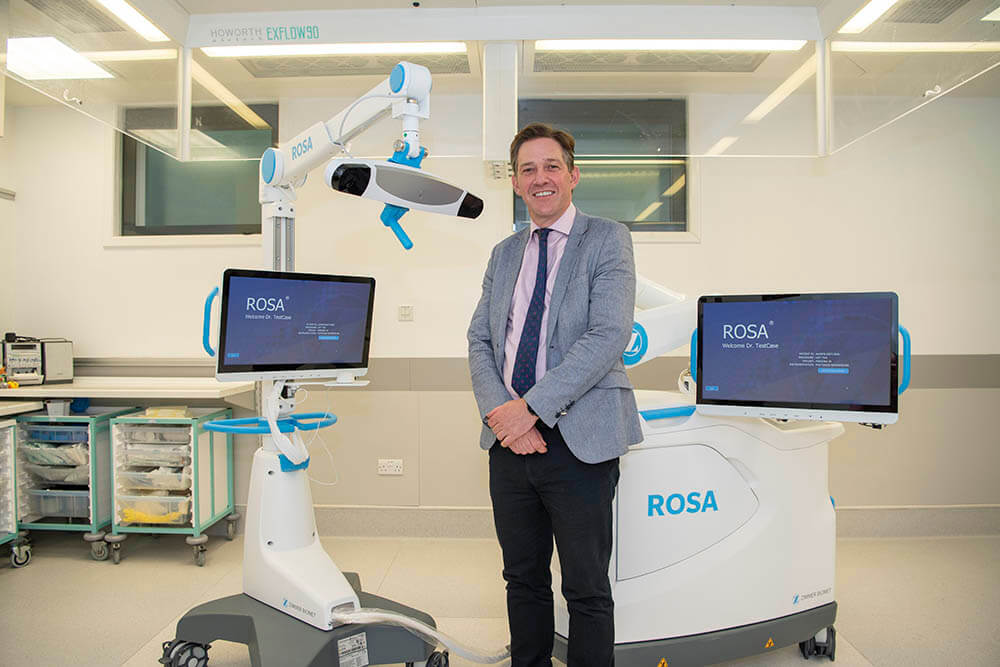 Is robot assisted surgery right for you?

It is not the case that robot assisted surgery is simply better by default. In many cases, we would continue to advocate conventional surgery as the lowest risk of two low risk options, and the least costly.

But as we have seen above, there is a small but significant group of patients who may benefit from the advantages the ROSA robot brings. Determining what’s right for you requires a balanced and honest discussion.

What’s clear is that robot assistance (from ROSA or any other system) does not remove the value of having an experienced knee surgeon responsibly explain the advantages and risks so you can make an educated, individualised decision.